UX/UI Design
Project Overview
Our team worked on a collaboration networking web platform for high school and college girls where they can network with professionals and mentors, collaborate on projects, build their portfolios, and get access to career opportunities. 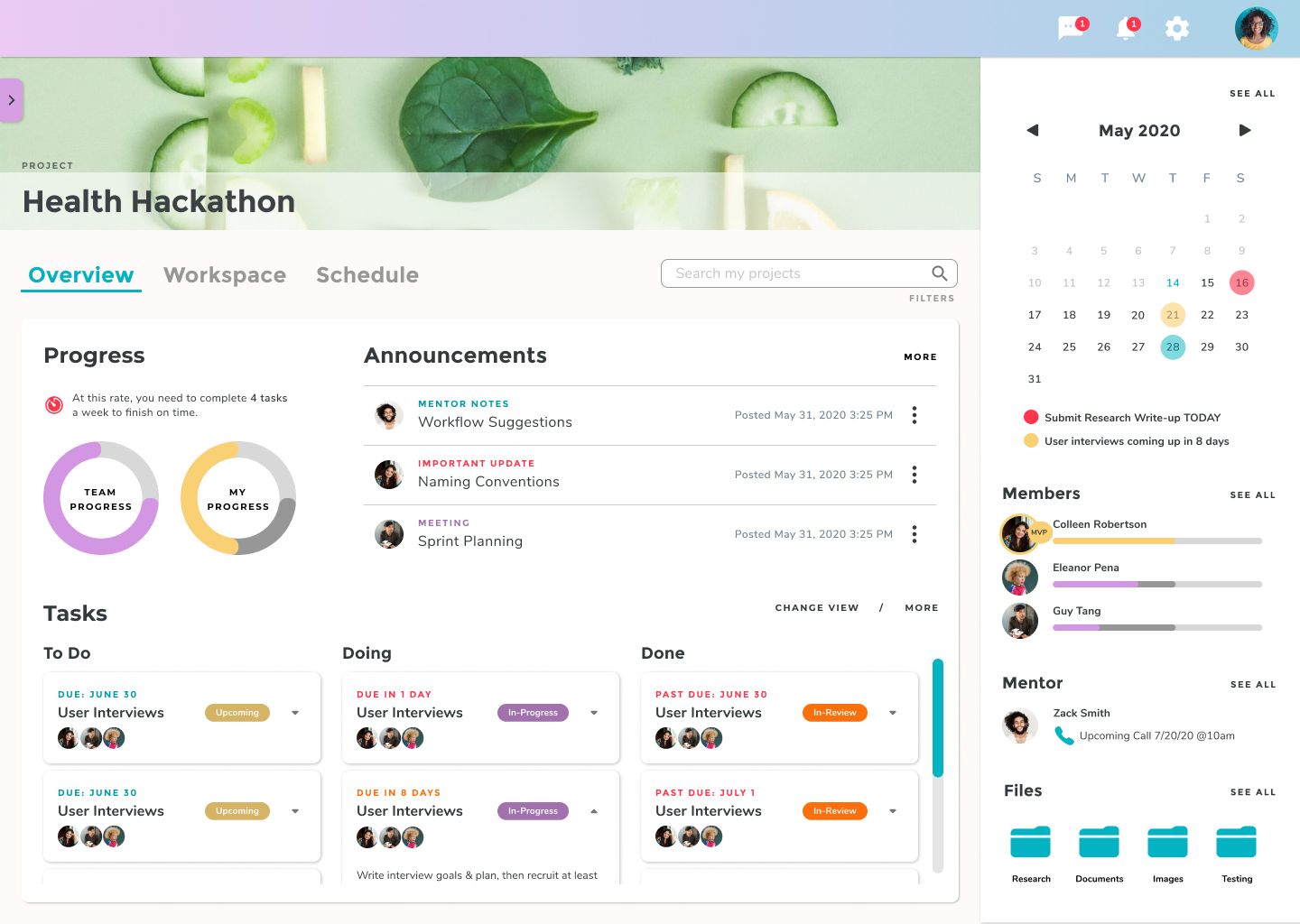 When I first joined, the team had already been working on the project for a few months. That meant the majority of research had already been conducted. I was shown the results from their competitive analysis and user interviews, and was given user personas, a basic site map, as well as the beginnings of a design system to get started.

Our team used Notion to organize our documents as well as assign tickets. Each ticket listed a problem statement, user stories, some inspiration photos, and a list of requirements. Each member was assigned multiple tickets due by the end of the week. We each were responsible for different screens as well as making sure our styles and naming conventions stayed consistent, as the design library itself wasn't finalized. 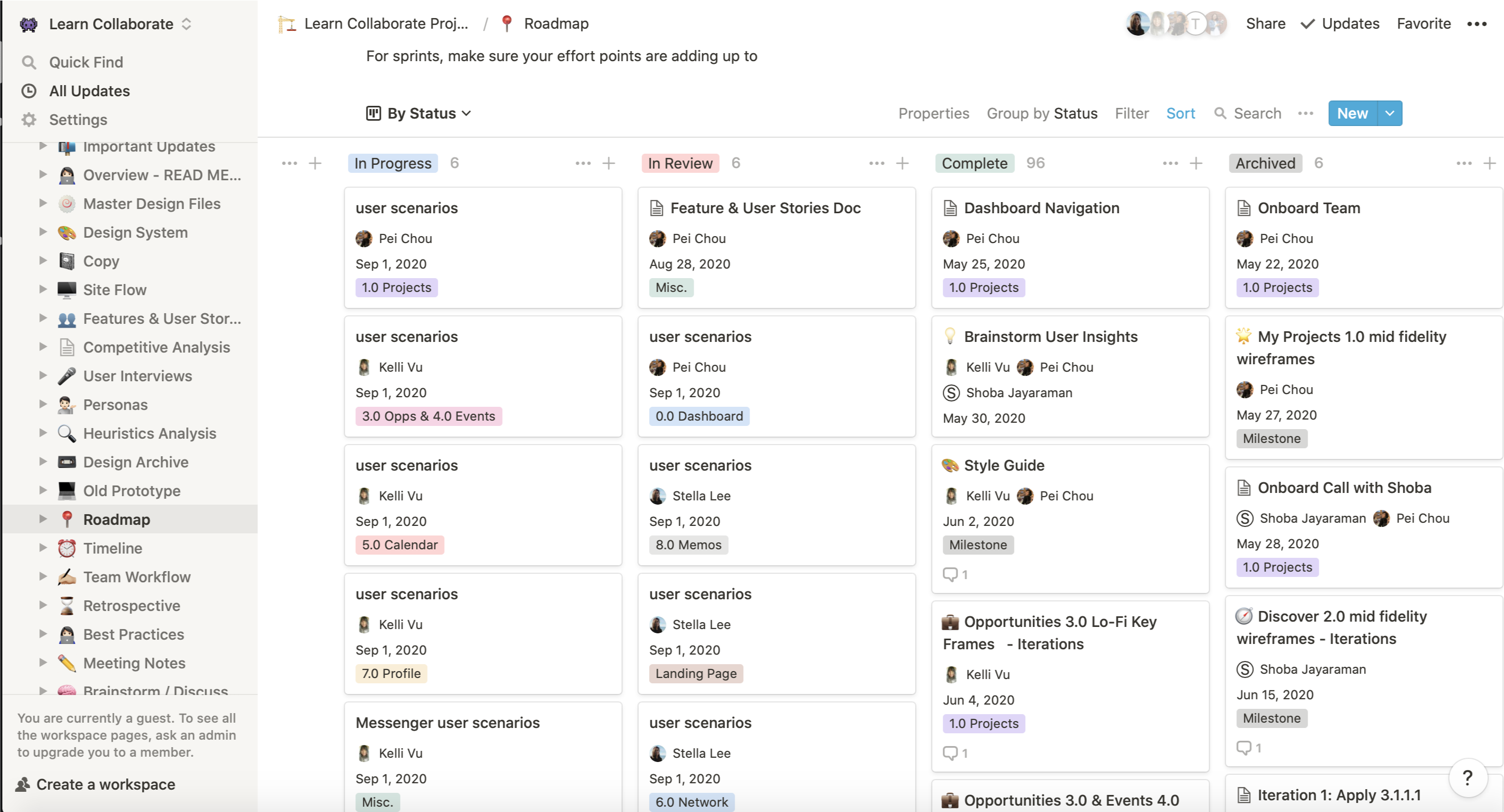 One of my tickets included coming up with a notes document editor similar to Google docs for users to easily take notes or start typing out case studies.

Users need a centralized place where they can directly go from managing their projects to working directly on task deliverables like writing reports, papers, presentations, etc. so they can seamlessly work together to complete a project from beginning to finish.

I analyzed the layouts of different competitors to see how they laid out the different sections and what users were already used to. I found the outline feature of Google docs especially useful, at it helped users navigate easily through longer documents.

My first iteration was clean and minimalist, but the functionality and intuitiveness of the design wasn't quite there. I had included icons on the side, thinking the icons were easily recognizable and text labels weren't necessary. However, a single usability test proved me wrong. In addition, there was too much shifting of sections between the different modes (notice that in Edit mode, the notes outline is on the left, but when switched to Comments mode, the comments push everything to the left and the comments appear on the right. The presentation mode had the slides on the left again similar to the notes outline).

My first iteration was clean and minimalist, but the functionality and intuitiveness of the design wasn't quite there. I had included icons on the side, thinking the icons were easily recognizable and text labels weren't necessary. However, a single usability test proved me wrong. My V2 design looks similar, but I added text labels to the navigation icons, and had comments appear directly on top of the notes instead. 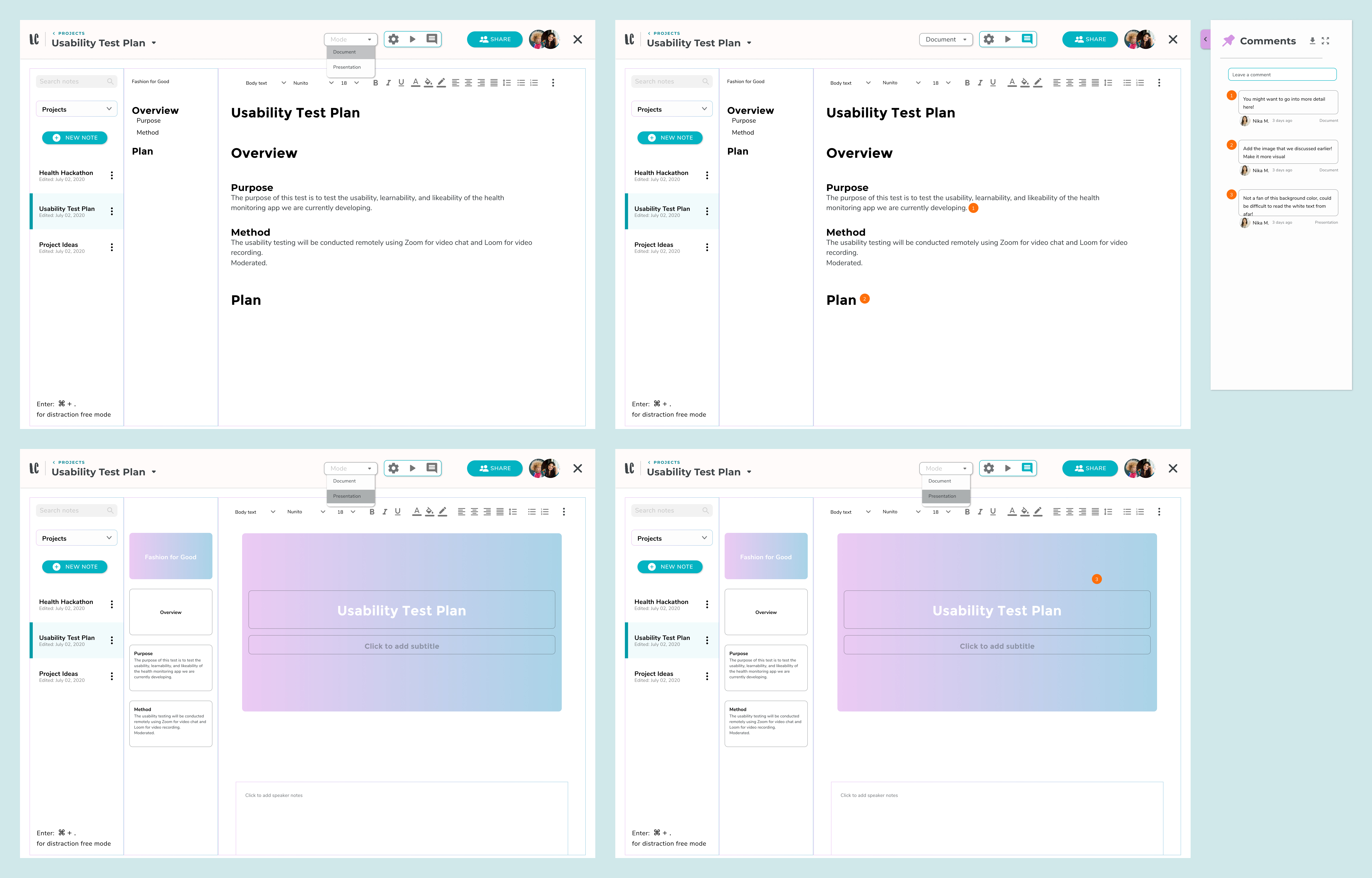 At this time, the PM finalized the whiteboard screen of this web application. Because these two tools are pretty similar, I adopted the top navigation bar that had been approved so users don't have to learn two different navigation styles. This ended up working perfectly as the comments appear in a separate side panel, allowing for comments to be tagged on both the document editor as well as the presentation editor.

With the Deadline Approaching...

Our goal had been to create an MVP to show stakeholders, but our product was getting convoluted and loaded with features and no longer felt like an MVP. Because of the looming deadline, we had to determine which features were necessary for users to accomplish their goal and which were extraneous and more suitable for future implementations. I compiled the list of screens and features we included in our site flow and worked with the team to narrow down the list. 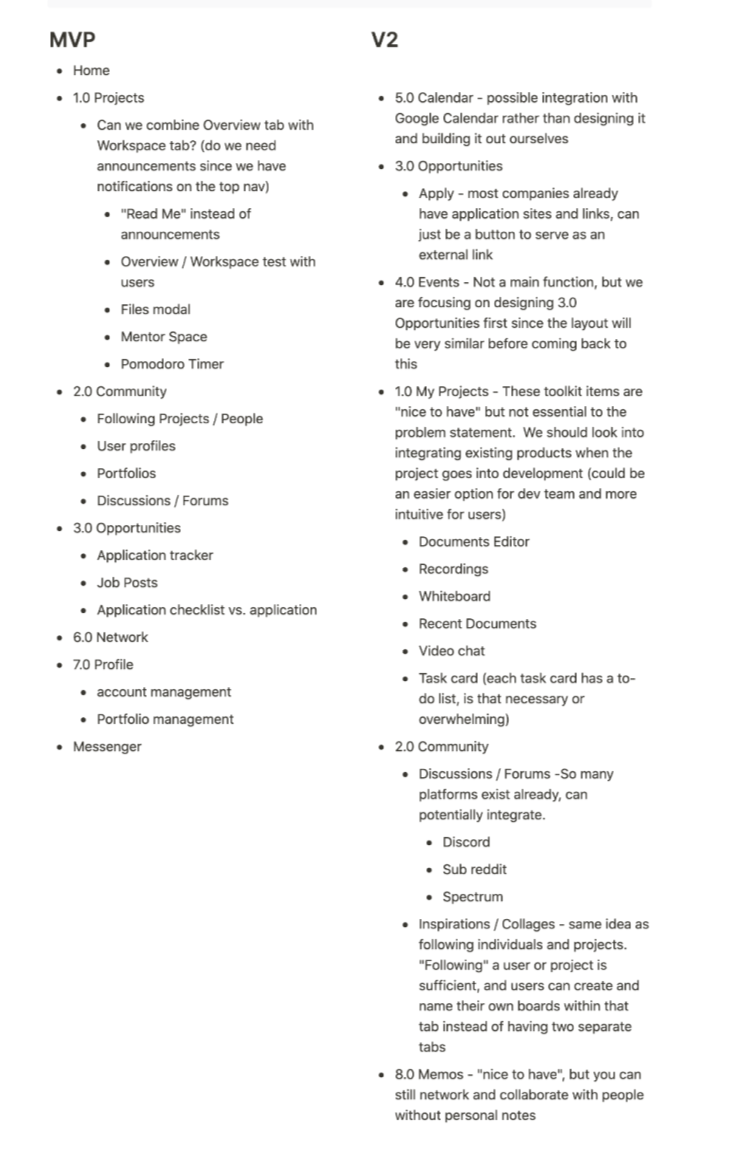 If you answer "yes" to any of these, move the feature in question to the v2 list.

We ended up taking out over half of the features from the MVP. At this point, many of the screens had already been designed, but it helped narrow down what was left and gave us more direction on which features we should focus our efforts on. In addition, it would help the engineers prioritize in the development stage.

Our final deliverable was a presentation to the stakeholders involved. They enjoyed the presentation and were genuinely excited about the web application we developed. We let them know the next steps before development would be to conduct further usability testing on the target audience.

I definitely learned a lot from this experience. As someone who joined the team late, I had just tried to go along with the flow without questioning the processes in place. We only took a step back to discuss our site map and roadmap when the team was feeling overwhelmed by the deadline. While this meant some wasted time on this particular project, it was a good reminder for all of us to always keep the MVP in mind. Working on this project for four months

Want to work together?

If you like what you see and want to work together, get in touch!